Bunnies!!! And Why We Craft

Here’s the link to the Eventbrite page where you can book a place at Sue’s workshop making bunnies.  Or you can drop me an email here and I’ll put you on the list.  Don’t forget to follow the blog – the posts will come to your inbox, and you’ll find out about everything as it happens. 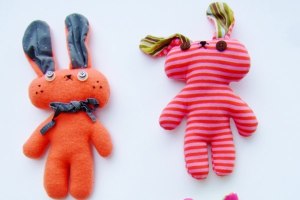 A blog I follow had some very interesting things to say this week.  It’s not a crafting blog but more about well-being and knowing how to find your best place in the world.  It’s written by Martha Beck, and said, in part:

People started telling me to “be here now” when I was about 20. “Great!” I responded. “How?” Be still, they said. Breathe. Well, fine. I started dutifully practicing meditation, by which I mean I tried to be still while compulsively planning my next billion-watt wow. But one day, while reading up on the latest research in positive psychology, I discovered a two-word instruction that reliably ushered me onto the plains of peace when I couldn’t force my brain to just “be still.” Here it is: Make something.

You see, creative work causes us to secrete dopamine, a hormone that can make us feel absorbed and fulfilled without feeling manic. This is in sharp contrast to the fight-or-flight mechanism, which is associated with hysteria hormones like adrenaline and cortisol. Research indicates that we’re most creative when we’re happy and relaxed, and conversely, that we can steer our brains into this state by undertaking a creative task.

To get a dopamine “hit,” make something that pushes you to the furthest edge of your ability, where you’re not only focused but learning and perfecting skills. Cooking an unfamiliar dish will do the trick, as will perfecting a new clogging routine. At first, depending on how addicted to mania you happen to be, the excitement-grubbing part of your brain won’t want to stop obsessing about over-the-top experiences. It will cling to its fantasies about the next huge thrill, its fears of Suicide Tuesday. Keep creating.

As you persist, your brain will eventually yield to the state psychologists call mindfulness. Your emotions will calm, even if you’re physically and mentally active. You won’t notice happiness when it first appears, because in true presence, the mind’s frantic searching stops. In its place arises a fascination with what’s occurring here and now. Though this feeling is subtle, it’s the opposite of dull. It’s infinitely varied and exquisite.

The aftermath of a creative surge, especially one that involves a new skill, is a sense of accomplishment and increased self-efficacy—which psychologists recognize as an important counter to depression. Instead of a Suicide Tuesday crash, you’re left with the happy fatigue of someone who is building strength.

Pay attention to this process, and you’ll see that the motivation to be here now will gradually grow stronger than the cultural pressure to seek excitement. You’ll find yourself increasingly able to tune in to the delights of the present even when you’re not actively creating. When this happens, you’ll be on your way to genuine happiness: abundant, sustainable delight in the beautiful moments of ordinary life.

Now, obviously Beck writes beautifully, and could probably convince you to iron your own tongue with prose like that; but I think there’s a certain truth here that is part of why we are all crafting – and part of what we are trying to find out, elucidate, evaluate in this project.  Do you agree?  Do let us know.

And join us for bunnies and your dopamine hit!

1 Response to Bunnies!!! And Why We Craft